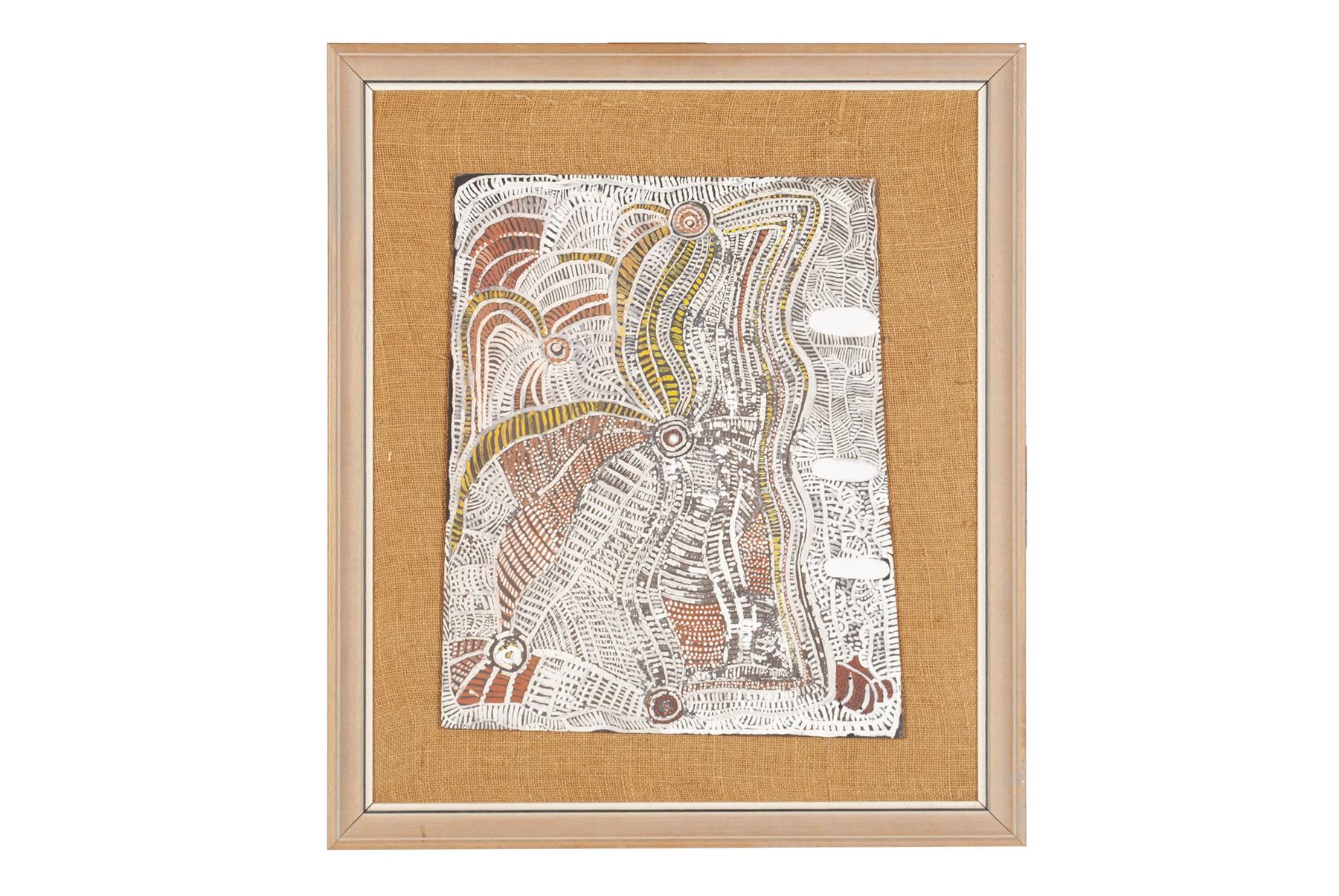 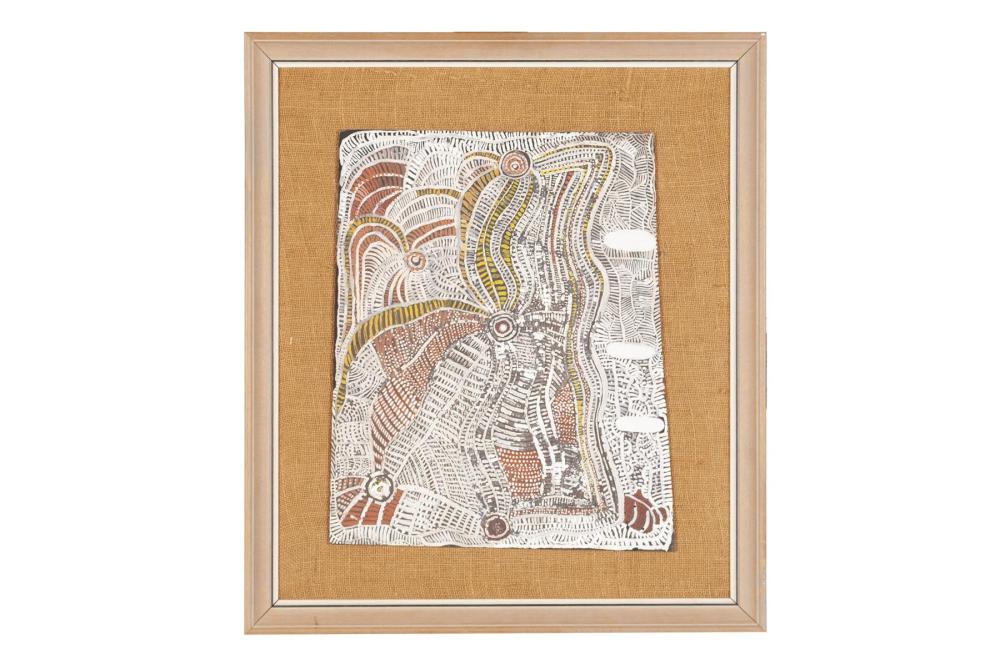 JOHNNY WARANGKULA TJUPURRULA (ABORIGINAL AUSTRALIAN, 1925-2001)
Water Dreaming
Synthetic polymer on an irregularly shaped board, 1972.
Abstract composition in traditional style, mounted to a fabric mat within wooden frame. Label for Stuart Art Centre, Alice Springs, N.T. with title and a variant of the artist's name, Johnny Warangula. Adhered to verso is a pocket with extant postcard written and post dated 1972 from the purchasing family while in Queenstown, Australia.

About the Artist: Johnny Warangkula Tjupurrula was born in 1925 at Minjilpirri, an area north west of Illipili and south of Lake Mackay. The son of mixed parents, his mother being of Luritja/Warlpiri/Pintupi descent and his father Luritja / Warlpiri, Johnny was raised in a traditional manner, living a traditional life style in the desert and never attending European schools. Johnny is of the Luritja language group and was initiated into manhood during his family's stay at a mission in Hermannsburg.

Johnny could recollect his first contact with Europeans, remembering his fearful response when witnessing an aircraft fly over his home lands as a young boy. His people believed the airplane to be a "mamu" or devil. At a later date, his people came into contact with camels for the first time and again hid in fright as they recognized the beasts as being evil.

His painting career began after a long turn at laboring, his efforts contributing to the development of roads, airstrips and settlements in areas such as: Haasts Bluff, Mt Leibig, Yuendumu and Mt Wedge. In return for his work building roads, shoveling dirt and felling trees he was remunerated in the form of consumable goods, "tucker" (as he calls it) - flour, tea, sugar, fresh vegetables and tobacco.

All of that is a far cry from the sophisticated auction rooms of Sotheby's where, in June 26, 2020 his painting from 1972 "Water Dreaming at Kalipinypa" changed hands for a record $251,500. When he sold the same painting at Papunya years earlier he received just $150 and remembers this only in terms of the food which it bought at the time.

Before the Haasts Bluff population were moved to Papunya in 1960, Johnny was selected along with Nosepeg Tjuppurrula as Aboriginal representative to meet the Queen. After settling in Papunya Johnny served on the Papunya Council with Mick Namarari, Limpi Tjapangati and Kingsley Tjungarrayi.

Geoffrey Bardon's arrival at Papunya inspired the community to begin using art materials, Johnny rapidly developed a distinctive style of his own which came to be known as "overdotting". He uses several layers of dots to depict his dreamings, which consist of Water, Fire, Yam and Egret stories. Also stories from Nyilppi and Nyalpilala - which are his father's Dreamings. Geoffrey Bardon labelled this stylistic layering effect as "tremulous illusion" and in his book, Papunya Tula Art of the Western Desert, Bardon fondly recollects images of Johnny painting with an intense level of intuitive concentration.

As Johnny's paintings are strictly Aboriginal stories without conscious European influence, they remain of major significance. Despite their distinct Aboriginality they can still be measured on a scale of modern aesthetic. He used calligraphic line with almost baroque excitement. Tight organization of bands and lines, hatching and dot embellishment give his work a powerful, energetic visual strength. He uses convoluted spiral symbols for people, animal tracks and distorted figures as illustrations of ceremony.

During the 1980's Johnny became a major force in the Papunya movement, receiving great critical acclaim for his contribution to the recognition of Papunya artists as a mirror for the identification of indigenous culture. In 1984 the director of the National Gallery of Australia, James Mollison, was photographed along side one of Johnny's works stating that the work of the Papunya artists was "the finest abstract art ever produced in this country".

From 1997 - 1999 Johnny painted this story with a new-found freedom, both in expression and in painting technique. Where he was once known for his delicate and soft white dotting, he now attacked the canvas to tell the story with great gusto. Had he painted in France during the 1950's he would have been labelled a Taschist. Johnny is a significant artist who retained an authenticity and timeless importance in his work that some of the younger painters are yet to achieve. All great painters, past and present, seem to have an additional level in their work which may defy description. This evasive quality is sometimes born of the synthesis achieved between colour, form, texture and meaning. When viewing paintings by Johnny Warangkula Jupurulla we find ourselves in a position where the recognition of another elemental level is tantalisingly close and for a lucky few the spirit is moved beyond words. In the presence of great visual art, language can become a futile and unproductive gesture.

You agree to pay a buyer's premium of up to 25.0% and any applicable taxes and shipping.